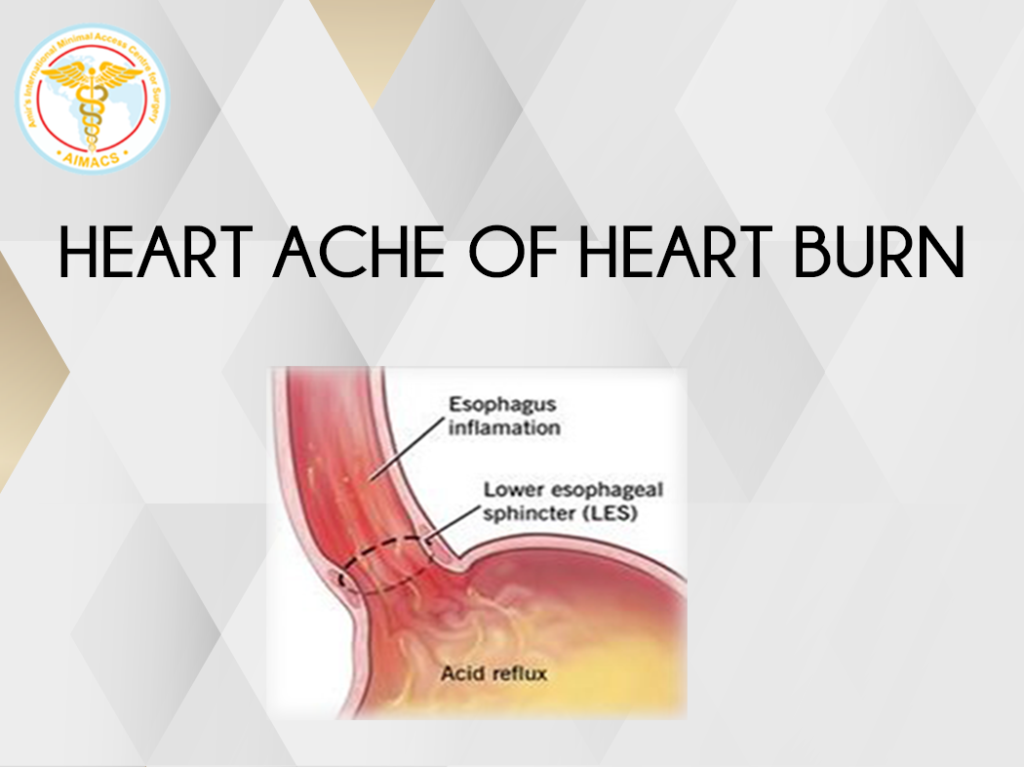 Heart burn takes over patient’s lives and adversely affects their eating, working and sleeping patterns. Medicines, once considered safe for long term use, now have shown to have significant side effects like osteoporosis, anaemia, tiredness, depression and may be even be linked to an increased risk of cancer, heart, liver or kidney disease.

Laparoscopic Nissen’s Fundoplication is a Minimal Invasive Operation in experienced and expert hands with excellent short- and long-term results.

Hernia generally present in the abdominal wall (tummy), however it can occur internally as diaphragmatic or hiatus hernia. Diaphragm is a muscular sheet separating the chest from the abdomen and Hiatus is the opening trough which food pipe (Oesophagus) enters abdomen from the chest.

When a part of stomach is pushed up into the chest through a loose hiatus; it’s called Hiatus Hernia.

People can have a hiatus hernia without any problems. However, it can lead to passage of acid from stomach into the Oesophagus (GORD / GERD); Gastro O/Esophageal Reflux Disease.

Hiatus hernias are classified into four categories; however, many variations are possible.

Type IV:     Giant Hiatal Hernias with other organs like bowel and spleen

migration into the chest along with stomach 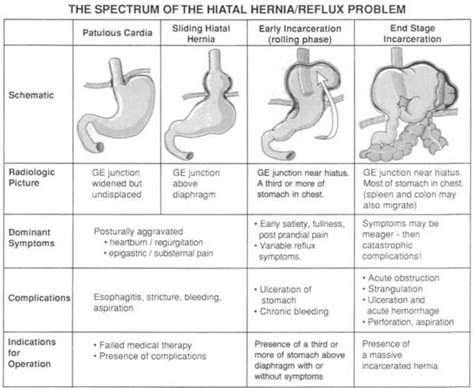 Hiatus hernia can present at any age; in new born or elderly.

Its recommended that a person diagnosed with Hiatus hernia should get advice from a surgeon with specialist interest experience in hernia surgery. The hernia diagnosis will be confirmed and appropriate advice regarding conservative or surgical management will be provided to the individual.

Hiatus hernia surgery has been around for nearly 70 years. This was initially done with an open approach involving a big cut on the tummy and/or chest. However, for the last 30 years its mostly done with a minimal invasive / keyhole approach; Laparoscopic Anti Reflux surgery.

Hiatus Hernia surgery is probably the most complex surgical procedure in General surgery (Upper Gastro Intestinal and Colorectal surgery.) Learning curve is long and getting consistently good outcomes in this operation designed for better functional outcomes is hard to achieve, unless one has true expertise in this area.

Professor Amir Nisar’s well known quote on the subject, couldn’t be more appropriate about the degree of difficulty and beauty of this surgery:

“In the hands of a surgeon par excellence, Laparoscopic Nissen’s Fundoplication is Science and Art at their pinnacle.”

Many surgeons attempt this surgery but only a few will achieve consistently good results.

Experience, expertise, number of surgeries, exposure to complex re-do Laparoscopic Antireflux surgeries, understanding the pathophysiology of reflux disease, critical assessment and bespoke treatment, overall experience in Oesophageal and Gastric surgery, passion of this disease management, “living, eating and sleeping over GORD” and finally / above all God’s divine help, guidance and blessings after an individual’s own hard work are the key steps to success. It’s only a surgeon’s effort but all Glory to God, for the cure.

There is no other operation in Laparoscopic and open surgery, which tests the skills, intellect and spiritual depth of a surgeon more than laparoscopic anti reflux surgery. “Most operations are “cut” or “cut and paste, whereas Laparoscopic Antireflux surgery is, “Mobilise, create, poetry in motion, sit and admire surgery” in essence: especially Amir’s MSL Mini Scar Less Fundoplication.

Rudolph Nissen was the surgeon who operated on Albert Einstein in 1948. Einstein’s well-known photo of sticking his tongue out while leaving a New York hospital after his major abdominal surgery, had his words as a caption in the following day’s newspapers; “My tummy for my surgeon (Nissen), my tongue to you (Journalists and photographers).”

With the advancement of Laparoscopic surgery, Nissen Fundoplication has become a very common operation in United Kingdom and Europe. Results to date are excellent and better than any other approaches, Laparoscopic or endoscopic.

National REFLUX trial, carried out in United Kingdom in late 90’s onwards showed safety of the technique and good results in experienced hands.

Indications of Laparoscopic Nissen’s Fundoplication in early 90’s were:

Current Indications of Laparoscopic Nissen’s Fundoplication since 1999 are:

Laparoscopic Nissen’s Fundoplication offers excellent long-term results, however some patients can get some reflux after 15-20 years.

Amir’s Fundoplication addresses this issue and has been successfully used for nearly 20 years.

The most recent edition is Amir’s MSL Fundoplication. MSL stands for Mini Scar Less. The scars are so small and few that even and trained surgeon is not able to identify these just with a few weeks after surgery.

Amir’s MSL Fundoplication not only offers the best cosmesis for this surgery but the very small incisions cause less trauma to the abdominal wall; hence less post-operative pain and least possible to negligible chance of port site hernia, quick recovery, early return to driving and work.

Laparoscopic Hiatal Hernia surgery uptake among surgeons in United Kingdom, Europe, United States and Asia has been good. In United Kingdom and other countries dedicated training centers have offered courses and master classes to train the surgeons to be able to offer this surgery safely.

The results can be poor in the hands of surgeons who have not carried out these surgeries over a number of years in established centers. Occasional surgeries done by surgeons working in low volume centers (Less than 100 cases a year) tends to get unsatisfactory and debilitating outcomes for the patients and must be avoided.

Professor Amir Nisar having done his first Laparoscopic Nissen’s Fundoplication 25 ears back in 1995 has worked in Minimal Access Therapy Training Unit (MATTU), Guildford, Surrey, United Kingdom has been the leading centers in training for Laparoscopic Anti reflux surgery, under the leadership of Professor Michael Bailey. This center trained surgeons of future from Europe, Asia, United States, Australia, and Africa.

Many eminent surgeons from the world operated as faculty in the center; cross fertilization of ideas, knowledge and skills enthused professor Amir Nisar to adopt this operation as his favourite.

He has been a teacher and Trainer of Laparoscopic Antireflux management and surgery in United Kingdom, Europe and Asia and has established many centers across the continents.

His trained students are practicing in all the continents in the world.

International Minimal Access Center for Surgery (IMACS) under to directorship of Professor Amir Nisar ran many courses over the years to teach and train the surgeons of future, with particular emphasis on the assessment, diagnoses and bespoke management of patients with Gastro Oesophageal reflux disease (GORD / GERD).

With Professor Bailey in United Kingdom, Professor Amir Nisar worked on the first time ever day case Laparoscopic Nissen’s Fundoplication surgery. 20 cases were performed in a study with excellent outcomes. Mean post-operative stay was only 5 hours and 26 minutes. All were discharged with no readmission. The team was awarded a Gold Medal in the Association of Surgeons of Great Britain and Ireland (ASGBI) annual meeting in 2002.

This has by far the best cosmetic results, quickest and relatively pain free recovery.

The accumulative length of the incisions for this operation is 1.6cm (16mm or 0.6 Inch) *.

In Amir’s Mini-Scar-Less Fundoplication (Amir’s MSL Fundoplication) the surgery performed inside is the same as standard Amir’s Fundoplication, which is minimally invasive with an accumulative incision length of 1.5 cm (16mm or 0.6 inch) *.

*These sutures are permanent stitches inside the body for hernia repair

Tired of Acid Reflux?
Get In Touch