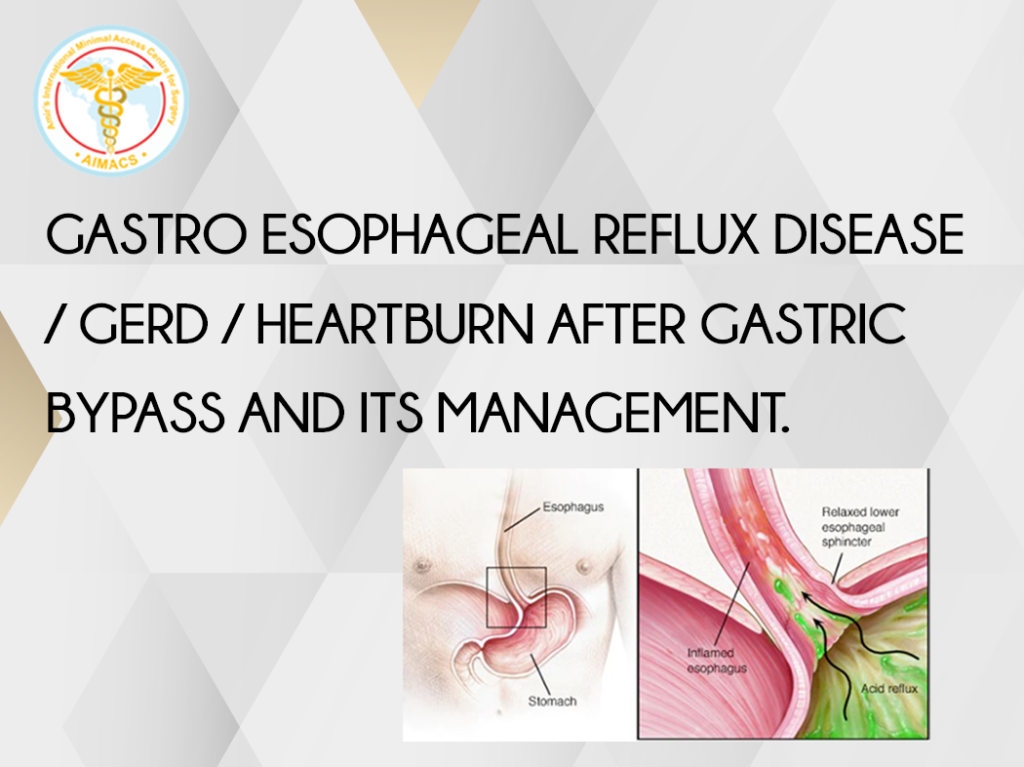 Many patients can suffer from mild or debilitating Reflux / Heartburn / Regurgitation of acid/food in their throats after gastric bypass operation. Understanding their problem and its solutions, helps cure the reflux after Gastric Bypass.

In medical fraternity, Gastric Bypass operation’s ability to control GERD is overestimated and not well substantiated in literature. As mentioned about, Gastric bypass patients will be GERD free in nearly 60% of the patients but 40 % will continue to have GERD.

There are two clinical scenarios where patients have a gastric bypass and reflux after it:

Author must reiterate that Gastric bypass is not an Antireflux operation. Its failure to control reflux is high.

Mild reflux after Gastric Bypass can be controlled with dietary adjustments. Taking 5-6 small dry meals and drinking 15 minutes to half an hour before meals helps. One should avoid eating 3-4 hours before going to bed. Using extra pillows and propping up the head end of the bed may also help.

Medication may help, medicines like PPIs (proton pump inhibitors) are generally less effective. Antacids do help a little to relieve the symptoms. Medication is more effective when the conservative measures described above are also observed.

Next step, if conservative and medical management fail to control GERD / Reflux after Gastric Bypass

One should seek resolution of reflux and its symptoms, as severe reflux can cause many problems:

Role of surgery, if all conservative measures and medical treatment has failed to control GERD after Gastric Bypass

Uncontrolled GERD/ Reflux has many serious issues as listed above. After failure of conservative and medical treatment one must not keep suffering and should consider surgical treatment options to avoid GERD related complications.

There is no plausible surgical option after a gastric bypass operation. However, in this difficult situation some surgeons will offer completion gastrectomy or Roux en Y OesophagoJejunostomy operation. It’s not a good option at all.

Completion gastrectomy or Roux en Y OesophagoJejunostomy is a complex/major operation involving resection (cutting) and anastomoses (joining the intestines). In majority of the cases this will be safe. However, its potential risks include:

Chances of success of a total/completion gastrectomy or Roux en Y OesophagoJejunostomy operation is in controlling reflux after Gastric Bypass?

This operation is a double ‘stalemate’ in this scenario. It is neither a weight loss operation nor an antireflux procedure. An unnecessary operation mentioned, offered and even done in these situations.

In our opinion there is no rational, reason or logic to consider this operation.

Instead “Amir’s Dubai Repair” should be considered.

Its unlikely to make any difference in reflux situation.

It will reverse the initial bariatric/ weight loss operation by reversing the restrictive component of the bypass operation.

Unfortunately, the answer is ‘no’ for the time being. “The cloth had been cut too short”.

Unfortunately, patient will have to live with the issues, problems and rely on medication to manage the condition.

We are working on this issue and hope to find an answer is due course.

Just in a few words, it’s a wrong operation to deal with reflux.

The safest and reliable surgical treatment for patients suffering from reflux that cannot be controlled with conservative means and medication?

In our opinion, at present Amir’s Dubai Repair – ADR is the safest, simplest and reliable option for reflux after sleeve gastrectomy or bypass operation.

No, Its based on the established principles of anti-reflux surgery,

Yes, our follow up and audit has confirmed excellent results so far.

Yes, because a surgeon must be highly skillful in Antireflux surgery. He should also have mastery of Bariatric surgery. Long term work experience at high volume tertiary referral centers dealing with primary, re-do and complex Antireflux surgery is crucial to tackle such cases.

No, it is not a complex operation from the patient’s point of view, as its minimal invasive (keyhole/ Laparoscopic surgery) and does not involve cutting or rejoining of the intestines and stomach like a gastric bypass operation (resection and anastomoses). In the hands of an experienced surgeon the surgery should be safe and smooth.

The hospital stay is generally 1-2 nights only. Recovery is quick too.

Why Amir’s Dubai Repair – ADR is better than the current treatment option?

Amir’s Dubai Repair – ADR is better than doing gastric bypass for reflux after sleeve gastrectomy for the following reasons:

The hospital stay is mostly 1 night in the hospital after surgery. In some cases, if another operation is combined to correct the complications of previous sleeve gastrectomy/ Gastric Bypass or any other issues then the stay can be longer. In case of any complications from surgery, one may need to stay in longer too.

Patients will be mobilising on the day of surgery after recovering from the anaesthetic. They will walk the following day and will be discharged home, if everything is fine.

Light walks can be commenced within 3-5 days.

Driving can be commenced once one is pain free and moving comfortable. This is generally day 5 to day 7 after the operation

Light gym exercise and yoga can be commenced after 2 weeks

Heavy exercise should be best avoided for 6 weeks after surgery

Our medium-term results (up to 3 years after ADR – Amir’s Dubai Repair surgery done for previous sleeve gastrectomy or bypass) have shown excellent results and 100% satisfaction rate. Patients have reported good quality of life.